I’m getting old and forgetful so before I completely forget why I disappeared from my office for a whole day. Here’s a summary of my key takeaway from the Yahoo OMS 2014, Hong Kong.

Statics:
2014, Hong Kong people spend avg. 148 mins daily accessing to the internet through their mobile devices, which is a 12% increase compared to last year.

Surprising? Nope. Any new engaging ad format on Mobile? Not that I’ms aware of. Tough cookie to crack.

I’m so glad that one of the countries I look after is on the top 3. My colleague and I were discussing why Japan is so up high on Tumblr use?

My take?
1. Tumblr is similar to Twitter that you don’t have to know your followers or the people you follow. You can remain completely anonymous, which fits their overall culture of being private and shy.
2. Tumblr is a very visual appealing platform with amazing animated gifs. With the Menga culture so deeply rooted in the Japanese culture, Japanese audience is no doubt easily fascinated by the visual/animated appeals.

This is a key way to make your brand up to date and appeal to the current social media savvy, content seeking generation. You have to be either very funny, very touching or completely incredible to be a social media/viral babe.

Many marketers, especially digital marketers, would fall into the trap that we have to create stories for digital. Viral campaign was such a buzz words a couple years ago. However, not all videos were made with the goals of getting viral would actually make it. Truth is, many just fail. Why? You have to have a GREAT story to begin with and the devil lives in the execution. It’s not that random low quality, flash of genius video don’t get viral, but these videos were usually not made to be viral.

I was responsible for a couple of semi-failure, myself. It’s hard to have a “brand-right” viral video unless your brand is embracing the risk. “Safe” can get you nowhere.

Act 1:
At one of the red carpet after-party, Ms. Joan Rivers, stormed out from the party with whipped cream on her face. With such a controversy personality, this potential “assault” attracted media attention. All the entertainment news was picking this up. 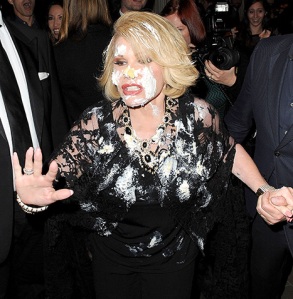 Later, a “secret” clip was revealed in the internet. The “attacker” was actually Miss Piggy from the Muppet. At that moment, the public knew it’s not some common cat fights between celebrities. It’s indeed a stunt, but it’s interesting enough to keep you follow.

Act 2:
A video documenting of Ms. Rivers & Piggy’ decade-long hostility against each other came up with interviews of other celebrities, with their speculation on the fight. Of course, the celebrities were carefully chosen. My favourite has to be, the girl from “Precious”, she went like “Seeing the cake thing, just broke my heart”. Her face was priceless. – This is pure entertainment.

Act 3:
Finally, the devil was revealed – Ms. Rivers and Piggy is going to battle on who’s better by going on QVC, a traditional TV shopping channel and see who can sell more in a day. Yes, the devil is QVC. Even though at that point, you knew the stunt is for QVC, you still want to know who won. The winner, of course, is QVC, who finally can tab into the younger generation and had the most social day.

There’s even a Muppet Wiki Page dedicated to this campaign.

What else did I learn? Yes, something for fellow marketers. Listen to your audience before coming up with the idea for a campaign. It’s not something new but as a marker, sometimes, you simply get ahead of yourself and forget the basic.

That’s about it. Hope it’s entertaining enough and it’s something you don’t know here. Got questions, please comment and let me know.

I’ve been asked this questions too many times “What’s the difference between digital marketing and ecommerce?”

So here’s my take on the differences:

Ecommerce is according to Wikipedia, “commonly known as e-commerce or eCommerce, is a type of industry where the buying and selling of products or services is conducted over electronic systems such as the Internet and other computer networks. Electronic commerce draws on technologies such as mobile commerce, electronic funds transfer, supply chain management, Internet marketing, online transaction processing, electronic data interchange (EDI), inventory management systems, and automated data collection systems. Modern electronic commerce typically uses the World Wide Web at least at one point in the transaction’s life-cycle, although it may encompass a wider range of technologies such as e-mail, mobile devices, social media, and telephones as well.”

Laymen terms again, it’s the act of doing business on digital channels. For that you need marketing and operation.

For different industries, operation can be very different. Just to name a few:

– Hotels/Travels – Operation involves the payment gateway, booking engines on the site and how it links to the reservation system in the hotel or air ticketing system

– Online learning – Operation involves payment gateway, how the online subscription is manage. How you are billed monthly, when your subscription end etc

Getting more confused?  One Sentence, digital marketing is one of the marketing means; ecommerce refer to the whole process of doing transaction with digital media. Hope it helps.

I wouldn’t say it’s a confession of an online shoppaholic. It’s more like putting things into perspective from a target audience’s eyes who happens to be a semi insider.

My Favourite eCommerce site of all time is ASOS! No doubt about it. It’s THE eCommerce site that got me addicted to online shopping and abandon brick and mortar as a whole.

Why do I love ASOS? Cheap and stylish isn’t just the only factors. [All images below are screen cape

1. Appeal to your Audience

Most of the customers, including me are almost always attracted by its deals and offering. Much too often, I didn’t end up buying just the discounted products, but a lot more full price products.

They know their target audience well. What are they looking for? They are looking for affordable fashion that gives you your character and make you able to stay up with the trend without paying your whole salary.

What grabs your first attention is the key visual that showcase “what’s in?”.

And next – Deals! Prominent discount sign just beneath the top navigation:

Enough for today. Now I have some serious shopping today. Stay Fab! Guess what I will buy? ;-p