Would you kiss a stranger? Would you do it in front of a camera? If so, how could you react to the awkwardness? Here’s a video of the answer for 20 chosen strangers.

I’m sure you must have heard of it already. This quasi social behavior project featuring 20 strangers kissing for the first time definitely warmed your heart and brought a smile on your face when you saw it, along with the 25 million fellow viewers.

The first time I saw it and thought it’s very cute and was totally intrigue of the soundtrack. I love Soko now. It looked like a social behavior experiment to me. “Should we make out more?” “What’s your name again?”

The whole video looked very natural and real.  Just like a lot of fellow Facebook fans who saw this video, I didn’t know it was an ad.  The video was picked up by Gizmodo and the article didn’t leave any hints of commercial (Watching complete strangers kiss for the first time is really beautiful) 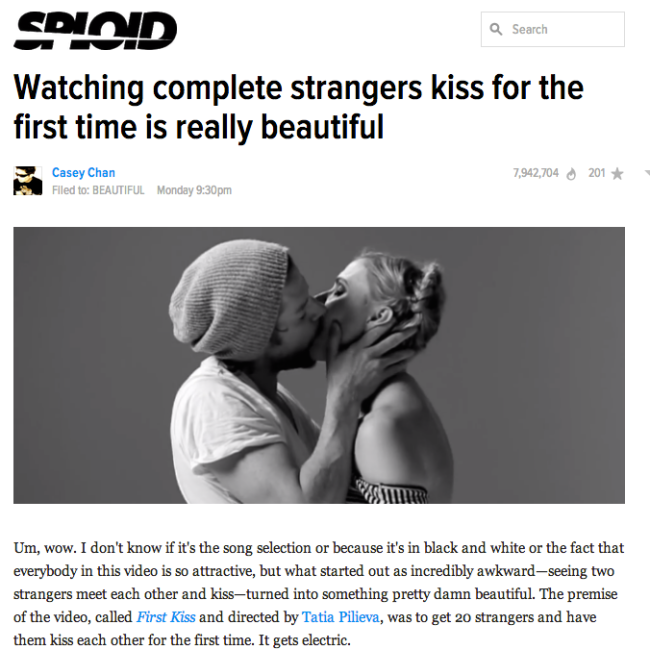 It wasn’t until the next day I read adWeek that came the shocking news. It was actually an Ad for Wren, an American Apparel company. I never knew this company exist until I read the article on AdWeek (Cringey-Cute Clothing Ad With Strangers Kissing Has 7 Million Views in One DayWren makes out like a bandit). The first 1 second of “Wren presents” really didn’t catch my attention at all.

At first, I thought it was a miss that in the video there’s almost no hints of Wren in there except I later found out that two of the key feature dresses were worn by the kissers. I do adore the dress worn by the older women.

Think twice, it’s actually a genius move to make the video as non commercial as possible to make it viral and bring the name out through PR.  I was curious to find out more about the brand. Actually it has a very tasteful site and nice products.

The video will gain more views for sure because it has been picked up by Mashable and fashion magazines. Once viral video is picked up by mainstream media, the second wave of viralness starts. It’s 25 Million views as of speak.

Companies always want to make viral video and few could actually make it viral. Why? They tend to keep a lot of product placement and obvious branding in the video. In the end, the video just became another not too special TVC. Sad but true. What we saw in this success is that it blend the brand essence into the video story itself and to appeal to audience on an emotional level. Emotional connection almost always sells.

Just a reminder of the old checklist of a viral video:

– it’s amazing and wow you

– it has cute babies, cats, dogs etc in it

How can a company video get one of the above and still stay on brand? That should be the real challenge.  “First Kiss” is a real success because it has got one parody already  (And Here’s the First Branded Parody of That Super-Viral ‘First Kiss’ AdBritish frozen yogurt is a good fit) Of course, it’s not as viral or even close.

Would you kiss a stranger in front of the camera? I would, as long as the person is good looking with nice breath 😉